With the passage of Issue 7 in the spring of 2020, Hamilton County voters approved a sales tax levy of 0.8 percent and a new funding source for Metro. With improved funding, Metro is bringing to life its Reinventing Metro plan, offering the Greater Cincinnati region bold, new transit innovations that will help grow the regional economy and better connect our community to jobs, education, health care and entertainment.

As the Reinventing Metro plan unfolds, Metro continues to solicit feedback from the community. Reinventing Metro’s investments in technology, innovation and service design will enable Metro to meet the needs of our dynamic region for many years to come.

How We Will Reinvent Metro: FAST

Shorter waits, with service every 15 minutes or better on major routes.

Extending how long buses run each day with 24-hour service on major corridors.

The Reinventing Metro plan calls for transit improvements that will positively impact all of Hamilton County. In the next five years, the plan will accomplish the following:

Full implementation of the Reinventing Metro plan will mean: 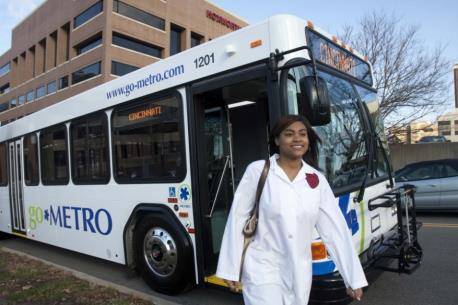 Learn more by reading some of the research that has informed the Reinventing Metro plan:

• UC Economics Center Study: A study that ranked us #1 in efficiency among our peer transportation cities.

• The Community Impact and Related Benefits of Metro: A 2015 study by the UC Economics Center that evaluated Metro's effect on the local economy.

• Reinventing Metro Development Study: In early 2017, we received a report from consultant AECOM, illustrating options for improving our system if additional funding were available for services in Hamilton County.