As part of the Reinventing Metro plan, Metro has the exciting opportunity to provide regional transit access to neighborhoods that historically have not had access to public transportation. Throughout 2021 and early 2022, Metro has been developing an accessible, on-demand and localized mobility service for all, including connections to Metro's network of more than 40 fixed bus routes.

Previously referred to as "Mobility On-Demand," this service will be called MetroNow!, with two zones planned to launch pilot service in late 2022/early 2023 (see below). Following these initial pilot launches, Metro will roll out several additional service zones.

How is this different from existing Metro bus service?

With MetroNow!, Metro aims to offer an additional on-demand option that is more flexible and aims to cater more closely to customers' individual needs when one of our existing fixed routes is not practical or accessible.

• Flex Route — The transit vehicle maintains a schedule along with a series of defined bus stops and serves off route locations within the zone upon advanced request.

• Point-to-Point — Think of this option like a rideshare service, such as Uber or Lyft: The transit vehicle provides curb-to-curb service for pick up and drop off locations within a defined zone through advance requests via phone call or app.

• First/Last-mile Connector — A variation of point-to-point service where, upon request, a passenger is picked up at any location within the MetroNow! area and is then taken to fixed-route bus stops, medical centers, shopping areas or other points of interest within the service zone; or, alternatively, a passenger is picked up from a point of interest within the service zone and dropped off at a location of their choosing.

Where will MetroNow! be available?

The goal of MetroNow! is to provide connectivity and access to public transportation where Metro's fixed-route service is limited or not feasible due to population density or vehicle size limitations.

As part of its service design study, Metro engaged communities throughout its service area to identify up to 10 potential neighborhoods that would benefit from and be conducive to on-demand mobility services. Six neighborhoods then were prioritized and recommended for initial pilots. As part of its data-gathering process, Metro conducted an online survey in October and November 2021, where members of the community could provide feedback on the program and how it could meet their transportation needs.

The first two pilot MetroNow! service zones will include the Springdale area (Zone E) and the Northgate/Mt. Healthy area (Zone C). These two zones were prioritized due to Springdale's need for improved access to healthcare and the potential in Northgate to connect more area residents to our major service routes along Colerain Avenue. 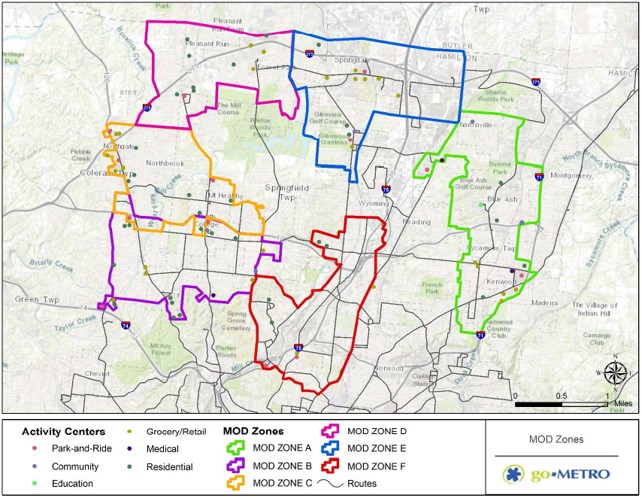 When will MetroNow! service come online?

The first two pilot service zones are planned to launch in late 2022 or early 2023.

Metro is finalizing the service design phase following a feedback-gathering period from stakeholders and communities who would benefit from on-demand mobility services.

Following those meetings, final recommendations were presented to the Metro administration and will ultimately go before the SORTA Board of Trustees for approval.