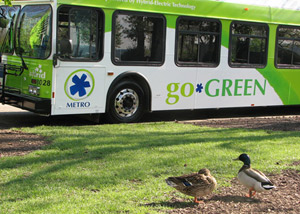 Q: What’s the difference between Metro and SORTA?

A: The Southwest Ohio Regional Transit Authority (SORTA) operates Metro buses and smaller Access buses for people whose disabilities prevent their use of Metro’s regular service.

Q: Does Metro make a profit?

A: Metro is a non-profit public service, not a for-profit company. About two-thirds of Metro’s operating budget comes from local, state and federal tax revenue, and about one-third comes from fares paid by our customers.

Q: How many buses does Metro have, how much does a bus cost, and how does Metro pay for buses?

A: Metro’s fleet includes over 414 vehicles, consisting of 357 fixed-route buses, and 57 Access vehicles. All buses have bike racks on the front and almost all have wheelchair lifts or ramps and security camera systems.

A new bus costs more than $450,000. Most of the funding (80-100%) to buy them comes from federal grant dollars, supplemented by state and local capital funds. If federal funds are used, the federal government requires Metro to keep each bus a minimum of 12 years or until the vehicle logs about 500,000 miles.

Q: Why do I sometimes see empty Metro buses?

A: Metro’s system is designed to meet peak demand, just like other transportation systems, including highways and roads. For example, the vehicle traffic on I-75 during rush hour is much heavier than it is at 2 a.m. - yet, the highway has to be built to accommodate the rush-hour requirement.

It’s the same for Metro. Metro adjusts the number of buses on the road depending on capacity needed. This means that there are a lot more buses operating during weekday rush hours than in the evenings or on weekends. For example, on Sundays, Metro operates fewer than 25% of the buses used during rush hour on a weekday.

Sometimes buses are empty because they are coming from the garage to begin their work. Buses also may be empty after passengers have exited at the primary destination, such as downtown, and the bus is just beginning the other leg of its trip.

Q: Why do I sometimes see buses just sitting at the side of the road?

A: The bus may be at the layover at the end of the route, which is considered a break for the driver, or the driver may be using the restroom at a convenience store or other designated comfort stop location.

Another reason might be that the bus is running earlier than scheduled. When we plan a schedule, we add a few extra minutes because things happen (traffic, weather, accidents, etc.) and we want to get back on schedule immediately if these delays occur.

If everything goes well, this could leave too much time, and we hold the bus back for a few minutes so we don't run early and miss passengers.

Q: Why do so many Metro routes go downtown?

A: Downtown Cincinnati is a vital employment center and about 20% of downtown workers ride Metro, easing parking and traffic downtown. Metro does provide three cross-town routes that intersect major arterial routes, so that customers don’t have to go all the way downtown to transfer.

Q: Why doesn’t Metro have service in Northern Kentucky?

A: Metro does not operate in Northern Kentucky, where transit services are provided by the Transit Authority of Northern Kentucky (TANK). Metro and TANK work cooperatively to provide regional transportation. Riders can transfer between the two systems from Metro’s Government Square hub in downtown Cincinnati.

Q: Who decides where bus stops should be?

A: There are about nearly 7,000 Metro bus stops. Metro looks for locations that offer safety and customer convenience. However, within the City of Cincinnati, the city’s traffic engineers make the final site decisions, in consultation with Metro. The bus stop shelters are owned and maintained by a private company that works with Metro. Metro is not affiliated with companies that install benches or newspaper boxes at bus stops.