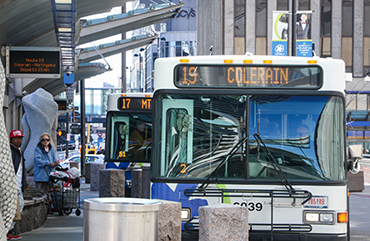 SORTA’s Board leadership, in compliance with the direction of Mayor John Cranley, is permitting Metro to be used as transport by the police department during local protests.

As a publicly funded entity, Metro supports and values its riders and the people of this city, who are the essence of its operation. We share their abhorrence of violence in all forms. We seek always to make decisions that keep our employees and riders safe.

Metro’s bus drivers, who are represented by the Amalgamated Transit Union Local 627, have elected to abstain from operating buses during the protests. We stand behind our operators and respect that this is their right. We will be using non-union supervisors to operate those vehicles.

As part of its efforts to keep operators and riders safe, Metro also enacted service changes to adhere to the city’s 9 p.m. curfew Sunday night and Monday night. If the city of Cincinnati extends the curfew, Metro will adhere for the safety of all.

Throughout its nearly 50-year history, Metro has always strived to support the safety of its drivers, riders and the public at large. From facilitating the transport of citizens to and from the city center for large public gatherings to being an active participant in training with law enforcement and regional hospitals for mass casualty, severe weather or natural disaster events.

We will continue to do our best to balance all competing demands in a safe and compassionate manner and continue to make decisions that best support our community, employees, riders and our city leadership.


About Metro
Metro is a non-profit, tax-funded public service of the Southwest Ohio Regional Transit Authority, providing about 14 million rides per year.