“GOING GREEN” IS MORE THAN A MOTTO AT METRO

Every day is Earth Day at Metro. 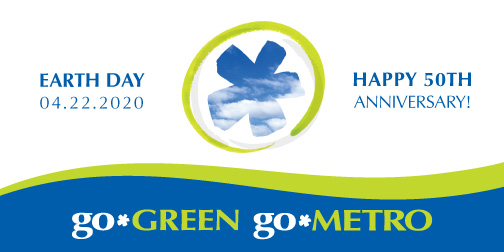 Although there may be fewer buses on the road due to COVID-19, Metro’s commitment to environmental sustainability remains as strong as ever.

Nationally, public transportation reduces the number of cars on the road and saves 4.2 billion gallons of gasoline, while reducing carbon dioxide emissions by 37 million metrics annually. One person switching to public transit can reduce daily carbon emissions by more than 4,800 pounds a year.

“As a transit system that moves nearly 50,000 people a day all over our region, it’s critical that we make smart decisions on how to lesson our footprint on the environment, whether it’s on the road or in our facilities,” said Darryl Haley, Metro CEO & General Manager. “We only have one Earth and it’s important to our employees and customers alike that we do what we can to protect it.”

Metro’s sustainability efforts have been celebrated both locally and nationally, including achieving bronze level recognition in sustainability commitment from the American Public Transportation Association (APTA), Achievement Level recognition from the Ohio EPA, the 2016 Recycling at Work Program of the Year award from Hamilton County Recycling and Solid Waste District, and the 2012 Cincinnati Earth Day Environmental Award.