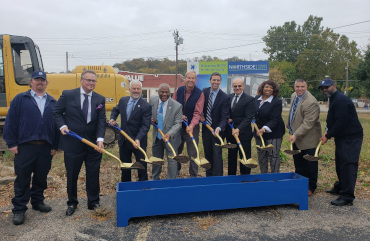 Metro officials and partners officially kicked off construction of the Northside Transit Center at a groundbreaking ceremony Tuesday. During the event, the transit agency also launched an art contest for Northside residents to help add an extra special Northside touch to the center’s design.

Residents are encouraged to submit designs for the installations at the transit center’s entrance and exit. The theme of the contest is, “What does Northside mean to me?” The contest is open through January 31, 2020. Submit designs and find the official rules at go-metro.com.

Tentatively scheduled to open in Summer 2020, the Northside Transit Center will feature:

“Today, we took a big step in making Metro safer, easier and more convenient, while contributing to the economic vibrancy of Northside,” said Darryl Haley, Metro Interim CEO. “We are excited to see the bustling activity at the Northside Transit Center in a few months as we serve this critical connection point in our region.”

Northside is the second highest transfer location in Metro’s system, second only to downtown’s Government Square.

The project was designed by MSA Architects and was created in partnership with the Federal Transit Administration, Ohio Department of Transportation, OKI Regional Council of Governments, City of Cincinnati and the Northside Business Association. Metro awarded the project’s construction to Graybach.

Construction is approximately $3.7 million, which is funded with 80 percent state and federal funds, as well as local match funding.