Program offers half-price fares for elderly, those with disabilities 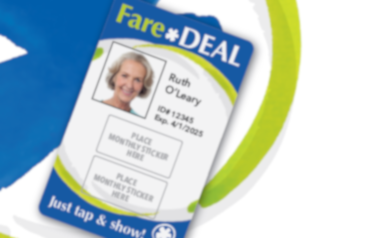 Beginning in April, Metro will implement changes to its Fare Deal program in order to better serve customers, making the program easier to use and more convenient.

Changes to the program include:

New Fare Deal application site downtown
Applications can be submitted and ID photos taken at Metro’s downtown Sales Office beginning in April on the second and third Tuesday of each month from 7 a.m. to 5:30 p.m. and the second Saturday of each month from 9 a.m. to noon.  Applications will continue to be accepted at the Silverton Fare Deal office, 7000 Montgomery Road, on Mondays, Wednesdays and Fridays from 8:15 a.m. to noon and from 1 to 4 p.m. The Silverton office is served by Rt. 4 (Kenwood or Blue Ash) and Rt. 90 Metro*Plus.

New options for Fare Deal cardholders to purchase monthly Fare Deal stickers
Beginning April 15, monthly stickers will be available for purchase by mail, with checks made payable to SORTA and mailed to 1801 Transpark Dr., Cincinnati, OH 45229, or by phone at 513-632-7591. Those looking to purchase the stickers in person can still do so at the Sales Office or at Metro’s Silverton Fare Deal office.

Metro’s Fare Deal program allows eligible riders to obtain a Fare Deal identification card valid for half-price fares on any Metro trip. Those 65 and older are automatically eligible. Medicare cardholders of any age are also automatically eligible. Riders with disabilities who don't have Medicare and are not 65 must submit an application and be certified to qualify for the program. Fare Deal is not an income-based program.