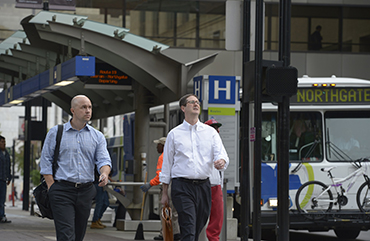 Riders at stops being removed should plan to board and exit the bus at the next closest stop.

The FAStops project, which began in June 2018 with a system-wide evaluation of Metro’s 4,000+ regular service bus stops, aims to not only speed up trip times, but to allow for the agency to make improvements along routes by streamlining bus stop placement. Each stop is assessed based on its location -- ensuring stops aren’t too close together -- as well as its usage, amenities, safety and accessibility.

Since January, Metro has hosted 14 community information sessions and collected feedback both in person and online from riders on proposed bus stop changes. As a result of the feedback Metro received, more than a dozen stops initially proposed for removal as part of the pilot will, instead, remain.

Metro will continue to gather feedback from the community during the pilot. Riders with comments or questions related to the FAStops project may email RouteComments@go-metro.com or visit go-metro.com/fastops to submit their feedback via an online survey.

*Riders of all Metro routes are encouraged to check Metro’s website for information about the pilot as some stops affected may serve more than one route.
Return
View all news articles