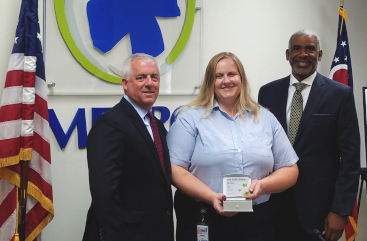 Metro Operator Maria Smith was recognized Tuesday evening by the Southwest Ohio Regional Transit Authority (SORTA) board for her actions at the scene of a deadly hit-and-run earlier this month on Harrison Avenue.

Smith was operating a Metro XTRA Service route on Sept. 10 when she arrived on the scene of an accident involving a pedestrian struck. She immediately stopped her bus and ran to assist the pedestrian, performing CPR and, later, directing traffic out of the way so that first responders could get to the scene.

“I just knew I had to go see if I could help,” said Smith, who joined Metro nine months ago after having worked for 10 years as a school bus operator. “I have a 14 year-old daughter and I just thought ‘that could have been her.’”

Smith was awarded a CEO S.T.A.R. Award at the SORTA board meeting on Sept. 18.

“What happened last week was absolutely tragic,” said Dwight A. Ferrell, Metro CEO and General Manager. “Maria’s actions and the way she stepped up to do what she could to help the victim and control the situation make all of us proud to call her our colleague.”

The CEO S.T.A.R. Award for “Service that Attracts Recognition,” is a selective award presented by, and at the sole discretion of Cincinnati Metro’s CEO. The award acknowledges and rewards employees who demonstrate exemplary service to Cincinnati Metro and the community.
Return
View all news articles