Operator Craig Whitehead was recently recognized by the Southwest Ohio Regional Transit Authority (SORTA) board for his quick thinking in coming to the aid of a child along his route. 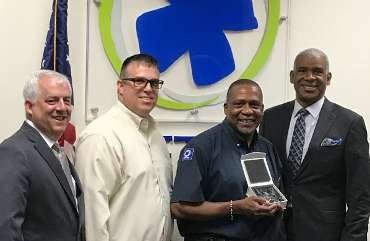 While driving on Rt. 33 Western Hills/Glenway on May 29, Whitehead, who has been a Metro operator for 27 years, spotted a small child wandering alone with two dogs when the child followed one of the dogs into the street into oncoming traffic.

He immediately sprang into action, stopping his bus, bringing the child onto the bus and calling for help. Whitehead remained with the child safely on board until police arrived.

“When I saw what was happening, I thought, I've got to get her some help,” said Whitehead. “I have grandchildren and I just couldn't imagine what could have happened. It was in the middle of rush hour traffic. It was quite scary.”

Whitehead was presented with a CEO S.T.A.R. Award at the SORTA board meeting on June 19.

“Every day, our operators are in the community, serving the public,” said Dwight A. Ferrell, Metro CEO and GM. “The quick thinking exhibited by Craig that day is something that makes all of us proud to call him a member of our team.”

The CEO S.T.A.R. Award for “Service that Attracts Recognition,” is a selective award presented by, and at the sole discretion of Metro’s CEO. The award acknowledges and rewards employees who demonstrate exemplary service to Metro and the community.