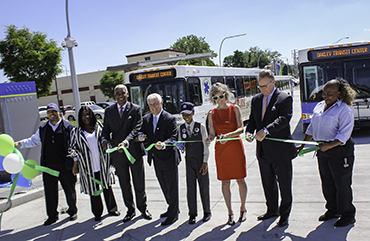 Better connections to jobs, shopping and entertainment; enhanced customer amenities; and a new park and ride were all things to celebrate during the grand opening of Metro’s new Oakley Transit Center today.

The Oakley area is a major job base for the region, representing approximately 7,100 jobs at various retailers.

Service to the Oakley Transit Center will officially begin on May 27. The transit center is served by two east-west crosstown routes, the 41 and 51, two local routes, the 4 and 11, and one express route to downtown, the 12X. The center offers customers many amenities, including:

“The Oakley Transit Center, with its proximity to many retailers and other businesses, will be a great addition for the Oakley community and the many riders who use our service to travel to and through the area,” said Metro CEO & General Manager Dwight A. Ferrell. “It’s just one the many ways we’re working to reinvent Metro with the necessary amenities that make using public transportation easier and more attractive.”

The project was designed by the Transportation Planning and Urban Design section of the City of Cincinnati’s Department of Transportation and Engineering and constructed by Ford Development Corporation.

The center was created in partnership with the Southwest Ohio Regional Transit Authority, the Ohio Department of Transportation, OKI regional Council of Governments, the City of Cincinnati and the Federal Transit Administration.

Metro secured $1.2 million for the construction of the Oakley Transit Center with a Federal Surface Transportation Program grant and local funds.