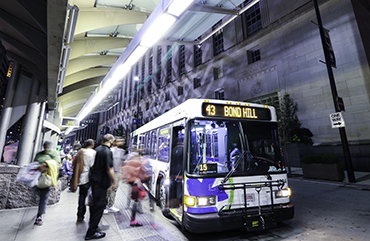 Today, the Southwest Ohio Regional Transit Authority Board reviewed the Reinventing Metro plan concept, which outlines transit improvements that are possible if new sales tax funding is secured. This represents the culmination of almost three years’ worth of community outreach and planning. No decisions related to the plan were made.

The Reinventing Metro plan includes service plans for sales tax options from 0.5% to 1.0% in 0.1% increments, consistent with new state law. The objectives of the plan are financial sustainability, improved service frequency, longer service hours, and shorter trip times for customers.

All scenarios assume that:
• The current 3/10th of 1% of the earnings tax collected by the City of Cincinnati for transit is not used by SORTA
• Modest fare increases are implemented every year
• Fares generate about 20% of the revenue needed to operate the transit system.

The 0.5% sales tax maintains current service levels, but does not allow for new service.

Here are some of the highlights of the plan at the 0.6% level and above:
• Access service for people with disabilities expanded
• New crosstown routes… no need to transfer downtown
• Circulator service for better job access
• More frequent service
• Routes extended further into the county
• Longer hours of service
• More weekend service
• 24-hour service on major corridors
• New Bus Rapid Transit at .08% or above

“This is a critical time for our community’s public transportation system. We’re talking about setting up our riders for the future,” said Metro CEO and General Manager Dwight A. Ferrell. “Metro is excited about the options we’re bringing to the public and look forward to letting the community decide what it wants.”

“Now that we have collected valuable feedback and data, our next steps are to engage and have a dialogue with our riders and the public to determine the future of Metro and to build community coalitions to successfully achieve meaningful change in 2018,” added SORTA Board Chair Jason Dunn.

View the Reinventing Metro Conceptual Plan below and take a survey here. 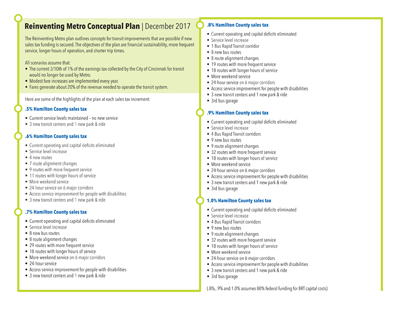 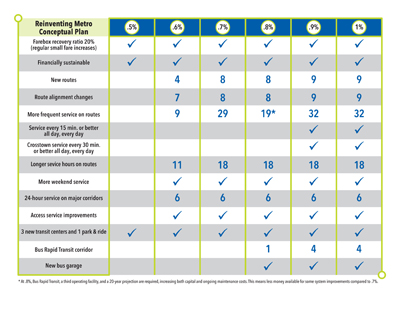 Background:
SORTA projects a budget deficit every year after 2018. This is largely a result of decreasing ridership as jobs move to areas of the county not adequately served – if at all – by public transit. Metro service is mostly limited to the city, as its primary public funding comes from a portion of the City of Cincinnati earnings tax. Without a change to its public funding structure, SORTA soon will be forced to seek fare increases, reduce services or both, even further limiting access to jobs, school and services.

In 2016, the Metro Futures Task Force, composed of 20 business and community leaders, found that SORTA’s current business model is unsustainable and recommended that SORTA’s local funding should be a permanent sales tax, not the City earnings tax. In June 2017, the SORTA Board directed staff to take all appropriate steps to explore placing a ballot initiative before Hamilton County voters in 2018.