2018 Budget Balanced, But Options Running Out for S.O.R.T.A. 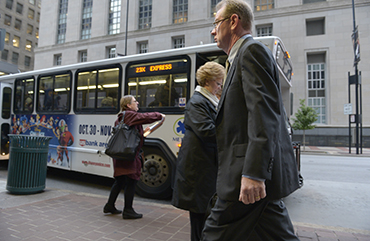 CINCINNATI – Today, the Southwest Ohio Regional Transit Authority -- which operates Metro and Access transit services -- approved its 2018 budget. However, leaders warn that without a new funding structure, deficits could require SORTA to begin significantly reducing transit service as early as 2019.

The total SORTA budget for 2018 is $98.1 million, a 2% increase over the 2017 budget.  SORTA plans to use $56.4 million from the City of Cincinnati Transit Fund in 2018.  All Transit Fund dollars will be used for operating expenses, with no funding for capital expenses including replacement of buses past their useful life.  Fares, service contracts, federal and state funding, and miscellaneous revenue like transit advertising comprise the remainder of SORTA’s revenue.

To prepare for 2018, SORTA further reduced expenses in 2017, including:

SORTA continues to struggle with replacement of old buses and basic capital items needed to operate the system.  In 2018, SORTA will have 101 buses that are 12 years old or older, past their useful life.  Older buses cost much more to maintain and operate, adding to operating expense.

"The SORTA Board today approved a prudent budget plan that sets the organization up to deliver on key metrics in 2018. The budget is balanced and includes plans for our Administration to continue to identify efficiencies and cost savings throughout the year,” said Jason Dunn, Chair of the SORTA Board. “I'm proud that every day SORTA is serving our customers and this community effectively, within the resources that we have available. But in the long run, we have difficult decisions to make as a community about our system. We will continue to engage collaboratively with all of our stakeholders to create a long-term plan for our transit system.”

“Unless we find additional funding, we’re facing significant deficits that could require major service reductions beginning in 2019,” said Dwight A. Ferrell, Metro’s CEO.  “At the same time that we’re working aggressively on the Reinventing Metro plan to improve service and get people to jobs, funding for our current system is not keeping pace with costs.  The old model is broken, both in terms of service delivery and funding.”