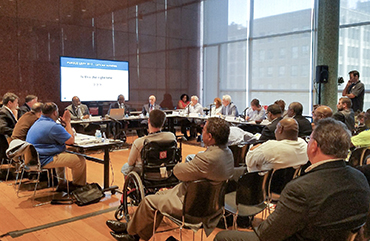 The Southwest Ohio Regional Transit Authority (SORTA) Board of Trustees voted to express its intent to place a Hamilton County-wide sales tax levy on the November 2018 ballot. The percentage of the proposed increase was not specified at the board’s monthly meeting on Tuesday. SORTA also directed its staff to encourage the Mayor and City Council to achieve clarity on the disposition of the city earnings tax now being collected for public transportation purposes.

No funds from a Metro tax initiative would go toward the Cincinnati Bell Connector. About half of SORTA’s operating budget comes from 3/10th of 1 percent of the City of Cincinnati earnings tax that is dedicated for transit use only. SORTA does not currently receive funding from Hamilton County. The transit agency is required by law to balance its budget.

“Metro has an opportunity to expand and improve bus service to better serve those who need it and those who choose to use it,” said Jason Dunn, SORTA board chair. “We have much work ahead on this path toward a more connected region that we believe will improve our community’s quality of life.”

“Something has to change,” he continued. “Our reliance on funding from the City of Cincinnati has not allowed us to serve areas outside of the city, where thousands of jobs are located, many of them available to city residents if they can get there. If nothing changes, Metro’s situation only gets worse, and area bus riders will suffer.”

A University of Cincinnati (UC) Economics Center study found that 75,000 jobs in the region are not easily accessible by Metro.

Next steps for SORTA include receiving final reports from AECOM, a transit planning firm working with Metro to plan and design the service improvements, as well as the UC Economics Center regarding the community impacts of the proposed improvements.

SORTA also needs clarification of the City’s intended disposition of the earnings tax currently being collected by the City for public transportation purposes if voters approve a countywide sales tax to fund Metro. The Metro Futures Task Force, a group of 20 private citizens who undertook an independent review of Metro, in 2016 recommended that Metro be funded by a countywide (or beyond) sales tax and that the current earnings tax it receives be eliminated.

Moving forward, SORTA also will seek an independent financial review, continue to operate efficiently and effectively and continue to listen and talk with the community.

SORTA is expected to make its decision about the level of sales tax increase it would seek next year. Options under consideration include .5 percent, .75 percent and 1 percent.

As a political subdivision of the State of Ohio, SORTA is authorized to place a sales or property tax on the ballot in Hamilton County.
Return
View all news articles