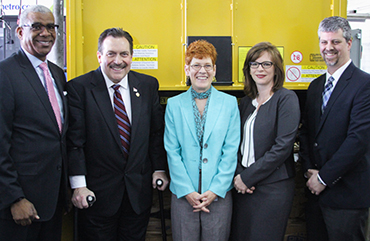 CINCINNATI – Metro and its more than 50,000 daily passengers are going even greener this Earth Month with the addition of a new cardboard baler.

The new baler system, which allows the organization to bundle and recycle the more than 40 cardboard boxes received at its garages each day, was purchased in part through a grant from the Ohio EPA. The baler will help Metro reduce pick-up service costs and potentially earn the organization more than $1,200 in revenue generated by the sale of the recycled cardboard each year.

“Environmental stewardship is important to our customers and the community, and we have made enormous strides towards reducing our environmental footprint and becoming a more sustainable organization,” said Metro CEO & General Manager Dwight A. Ferrell. “As we continue to look for ways to reduce our operational costs, we are finding that in many ways going green is helping us to save green.”

Green is more than a motto at Metro
In 2015, Metro entered a national transit environmental commitment with the American Public Transit Association that officially committed Metro to a core set of sustainability actions. To better align the transit system with those goals, today Metro’s CEO Dwight A. Ferrell and Sustainability and Outreach Manager Kim Lahman signed a new employee sustainability policy focusing on how employees can help the organization reduce its environmental footprint.