SORTA to ask City to use Transit Fund reserve funds and in process of joining Ohio Checkbook online. 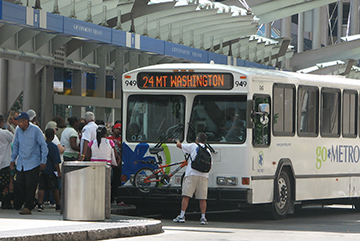 CINCINNATI – As the Southwest Ohio Regional Transit Authority (SORTA) prepares to submit its funding request as part of the City of Cincinnati’s 2017-2018 budget cycle, the transit agency is projecting a $3 million deficit for 2018. As a political subdivision of the state of Ohio, SORTA is required by law to have a balanced budget.

To balance its preliminary 2018 budget, SORTA will ask the City for $3 million from Transit Fund reserves. These are funds that are held by the City from the earnings tax collected for public transit purposes only and designated for SORTA’s use, not City General Reserves.

If the reserves are not made available, SORTA could be forced to reduce service and seek a fare increase to balance its 2018 budget. No final decisions have been made concerning specific routes that would be eliminated or reduced.

It is very early in SORTA’s fiscal year (Jan. 1-Dec. 31), however SORTA must make its request now for the City’s July 1-June 30 fiscal year. It’s really too early to know how SORTA’s budget will play out in the coming months, but SORTA must be prepared for the projected deficit. SORTA will finalize its 2018 fiscal year budget in November 2017 and will provide updates to the City at that time.

“We’ve proven ourselves to be an efficient system. We’ve stretched our resources as far as possible, and we will continue to find ways to reduce costs and improve productivity this year to try to offset the deficit,” said Metro CEO Dwight A. Ferrell. “We take fiscal responsibility very seriously, and we are currently working with Treasurer of Ohio Josh Mandel’s office to make our records available online at ohiocheckbook.com.”

“Even with these aggressive efforts, we project a gap between revenue and expenses next year,” said Ferrell. “Using Transit Fund reserves held by the City would be the most effective way to address our 2018 budget deficit with the least impact to the people who depend on our service.”

Ferrell continued: “This is a short-term fix. Deficits are projected to grow larger after 2018. Our current funding model is unsustainable. Last November, I stated that SORTA’s 2018 budgeting process would be extremely difficult and some hard decisions were ahead in the very near future.”

“We are partners with the City of Cincinnati and look forward to working cooperatively with them to address this issue. However, as we have said consistently, our organization is at a crossroads. We need more funding not just to address this budget issue, but to grow the system to meet the community’s need for better access to jobs. We need to reinvent Metro,” said Jason Dunn, Chair of the SORTA Board.

Budget background:
In November 2016, SORTA announced that its 2017 budget was balanced, but that budget deficits were projected beginning in 2018.

To balance the budget for 2017, SORTA made a number of non-recurring changes, including a switch to self-funded health insurance and one-time savings. Capital projects have been deferred. Four management positions were eliminated in September 2016. The belt-tightening included exploring all options for reducing expenses without impacting service.

SORTA also continues to struggle with replacement of old buses and replacement of basic capital items needed to operate the system. Older buses cost much more to maintain and operate, adding to the expense of operating the system.

About half of SORTA’s operating budget comes from 3/10th of 1% of the City of Cincinnati earnings tax that is dedicated for transit use only.