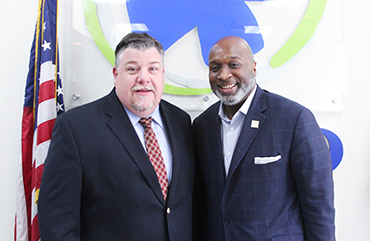 CINCINNATI – The Southwest Ohio Regional Transit Authority (SORTA) has re-elected Jason Dunn as Chair of the SORTA Board for 2017. Ken Reed was re-elected Vice Chair.

Jason Dunn (right): Dunn is Vice President of Multicultural & Community Development for the Cincinnati USA Convention & Visitors Bureau (CVB). In his current role, he develops and manages the CVB’s comprehensive multicultural strategy, working to more deeply engage the local community, region-wide partners, and the CVB sales team to provide support in analyzing and pursing new business opportunities. A well-known, well-respected leader locally and nationally, he is described as the region’s strongest voice for Multicultural Conventions. Mr. Dunn was named to Mass Transit Magazine’s “Top 40 Under Forty” list in 2014 for his impact on the transit industry. He joined the SORTA board in 2012.

Ken Reed (left): Reed has work in or with public transit since 1998. He is currently Loss Control Services Manager for the Ohio Transit Risk Pool, where he is responsible for the oversight of all loss control, training, and risk auditing activities. He previously served as General Manager at the Butler County Regional Transit Authority in Hamilton, Ohio. Since, 1994, Mr. Reed has served on the board of the Ohio-Kentucky-Indiana (OKI) Regional Council of Governments, which coordinates regional transportation planning in the Greater Cincinnati region. He also spent 12 years as an elected member of Trenton City Council, a community of 11,000, situated in southwest Ohio. Mr. Reed joined the SORTA board in 2011.