In the inaugural round of SORTA’s new Transit Infrastructure Fund, the ceremony celebrated the distribution of approximately $220 million in grants to 30 infrastructure projects across 22 Hamilton County communities. 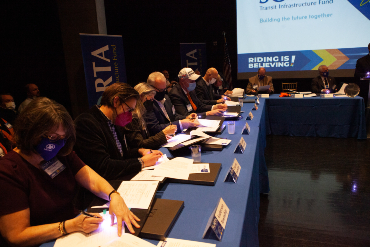 CINCINNATI – The Southwest Ohio Regional Transit Authority (SORTA) was thrilled Thursday to host the first of many future celebrations of our community’s historic investment in transit and infrastructure throughout Hamilton County. In the inaugural round of SORTA’s new Transit Infrastructure Fund, the ceremony celebrated the distribution of approximately $227 million in grants to 30 infrastructure projects across 22 Hamilton County communities.

“When we embarked on bringing a levy before the residents of Hamilton County, it wasn’t just about more funding for the transit system,” said SORTA Board Chairman Kreg Keesee. “While that is a key piece to our region’s growth, Issue 7 was also an investment that would bring about the economic vibrancy of our region by upgrading the roads and bridges upon which cars, trucks and buses all rely every day.”

The Transit Infrastructure Fund was established when Hamilton County voters in 2020 approved Issue 7, which changed the way SORTA and Metro receive local funding, from a 0.3% city of Cincinnati income tax levy to a 0.8% county sales tax levy. Per the ballot measure, 25% of that revenue shall go toward road, bridge and other infrastructure improvements within Metro’s service area throughout the county.

“We are incredibly grateful for the support and trust that Hamilton County residents have invested in SORTA to bring forth a new era in public transportation and infrastructure for our region,” said SORTA CEO and General Manager Darryl Haley. “The Transit Infrastructure Fund will continue to play a major role in the plan to improve overall mobility throughout the region, and each of these awards brings another victory for the citizens of Hamilton County.”