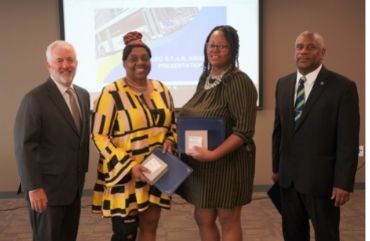 CINCINNATI – Two employees of Metro’s Access paratransit service, Shandrika “Shay” Sanders and Shaun Rutherford, were recognized today by the Southwest Ohio Regional Transit Authority (SORTA) Board of Trustees for coming to the aid of an Access operator who experienced a medical emergency while on duty.

On June 6, Dispatcher Shaun Rutherford received a call from an Access operator in distress. He was on his way back to base but wasn’t feeling well, so he asked dispatch to call 911 so he could be treated upon his return. Access Operator Shay Sanders overheard the conversation and jumped into action.

Sanders got on her bus and met the operator at his location. She helped him off his bus and onto hers, and then she radioed dispatch to let them know she was transporting the operator to the hospital. With the guidance of Rutherford and a 911 operator, she cared for him until paramedics met them en route, where they took over life-saving efforts to stabilize the ailing operator before transporting him to the hospital.

After the heroic rescue, Rutherford finished her shift in dispatch and Sanders went back to her regular duties, picking up her next passenger and completing the last drop off of the day.

“Shay and Shaun are shining examples of the compassion and excellence our operators demonstrate daily,” said Metro CEO and General Manager Darryl Haley. “Shay did not hesitate to help a colleague in need, and paramedics on the scene confirmed that her actions saved her fellow operator’s life. And Shaun remained calm and in control of a harrowing situation in order to relay vital information between the 911 operator and Shay, giving her encouragement the entire time.

“We are extremely grateful that their actions helped save our colleague’s life,” Haley continued. “And – to top it off – they both committed to finishing their normal work that day, helping members of our community get where they needed to be.”

Rutherford and Sanders were both presented with CEO S.T.A.R. Awards for their efforts. The selective award recognizes “Service that Attracts Recognition,” and is presented by and at the sole discretion of Metro’s CEO. The award acknowledges and rewards employees who demonstrate exemplary service to Cincinnati Metro and the community.