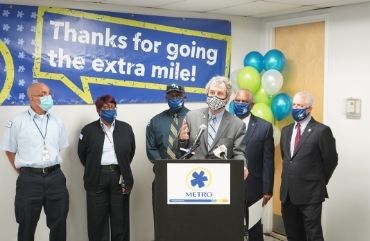 WASHINGTON, D.C. - U.S. Senator Sherrod Brown (D-OH) joined Vice President Kamala Harris for a roundtable discussion in Cincinnati to hear from Ohioans about the need to invest in our nation’s infrastructure, including public transit systems. They were joined by leaders from the Southwest Ohio Regional Transit Authority (SORTA/METRO), the Cincinnati USA Regional Chamber, the Greater Cincinnati Urban League, ATU Local 627, and the University of Cincinnati.

“Ohio has a proud legacy of leading the country when it comes to transportation innovation, and I was proud to help share the opportunities we have in Cincinnati with Vice President Harris. We need a transformational investment in Ohio infrastructure, including transit, that puts Ohioans to work at good-paying jobs, connects people with opportunity, and invests in the communities that have been left on their own by Washington and Wall Street for too long,” said Brown. “I look forward to working with Cincinnati leaders and the Biden Administration to make historic investments in Ohio infrastructure and ensure that these jobs become a reality.”

Now, Brown is pushing for action on the American Jobs Plan, which includes historic investments in improving our nation’s infrastructure.

The American Jobs Plan contains several critical investments that would benefit Ohioans and their communities. The proposal would:


"Investing in public transportation and infrastructure benefits us all and helps ensure communities are able to grow and thrive," said SORTA CEO Darryl Haley. "Here in Cincinnati, that investment is allowing us to connect more people to work, including 20,000 new jobs with an economic impact of $850 million in wages. But there is still more needed investment that will allow us to electrify our fleet, invest in new technologies, update aging infrastructure and build a modern transit system for the future."

Brown has long fought for equitable investments in public transportation. He joined his colleagues in passing the American Rescue Plan, which included $30 billion of additional assistance for public transportation relief to prevent layoffs of transit workers and prevent cuts to transit services that essential workers and the general public rely on.