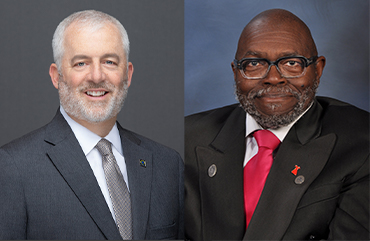 CINCINNATI – The Southwest Ohio Regional Transit Authority (SORTA) has re-elected Kreg Keesee as chair of the SORTA Board for 2021. Robert Harris was elected vice chair.

Kreg Keesee is the Chief Operating Officer for Michelman, Inc. Prior to Michelman he spent 18 years at Sun Chemical where he held leadership positions in supply chain, information technology and graphic services. He started his career as a commercial lender with Michigan National Bank and spent eight years working in Procter and Gamble’s food and beverage division. He received his degree in economics and later a Master’s in Business Administration from the University of Michigan.

Robert Harris is an inclusion consultant at Bridges for a Just Community. Previously, he worked as director for the Cincinnati region for Ohio Technology-Related Assistance Information Network (TRAIN) and as the education and training coordinator for the Cincinnati Human Relations Commission. He has served on several local boards and commissions, including a prior term on the SORTA Board of Trustees. Harris received his B.A. in community development and community relations, as well as in printmaking from the University of Cincinnati.

About SORTA: The Southwest Ohio Regional Transit Authority (SORTA) is a tax-supported, independent political subdivision of the State of Ohio.